This guest post comes from Amber Case, co-founder of Geoloqi, a private, real-time Platform for location sharing. She also speaks frequently on Cyborg Anthropology, the study of humans and computers.

In this post I'll describe how we planned, built and tested a truly real-time location-based game with Socket.io, Redis, Node.js, and what we learned along the way. Over the past few months, we've spent the majority our free time building a real-time game as a test for our location platform, Geoloqi. We call the game MapAttack! due to its map-based nature. Two teams compete to capture the most points on the gameboard. The gameboard, in this case, is the city streets of the neighborhood the players are in. 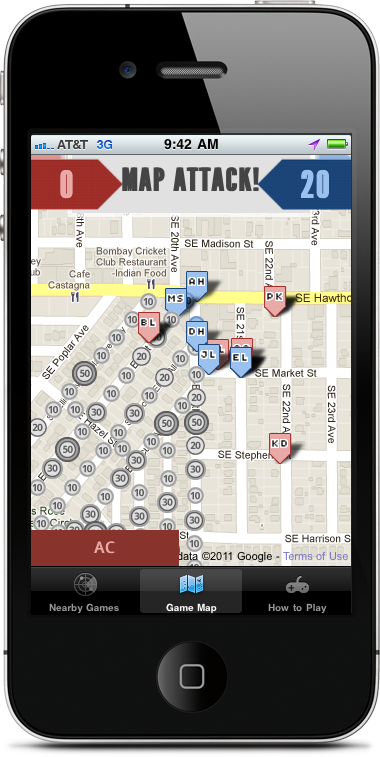 We set each geofence up with a point value that would give players points for entering geofences. The idea was that a virtual map would be set up on top of the real world, and players on red and blue teams would try to capture all of the geofence points in the game before the other team. To capture a point, the phone would have to detect when the player entered the fence, determine the point value of the fence, notify the player that he received the point, turn the geofence the color of the team, and then add the point to the player score and the overall team score.

Why Build a Real-Time Geofencing Game?

We wanted to create a game that allowed people to physically interact with the real world instead of a computer console like a first person shooter or a real-time strategy game. We were inspired by playing a real-life version of Pac-Man called Pacmanhattan, invented by graduate students at the Interactive Telecommunications Program at NYU in 2004. We played it at Portland’s WhereCamp conference in 2008, and we wanted to see if we could make a GPS version of the game, as Pacmanhattan relied entirely on phone calls and physical maps. We also needed a good demo of Geoloqi's streaming API.

Here is an overview of the problems we had to focus on in order to build the game.

GPS signals are known for reflecting off of tall buildings in urban settings. This causes inaccuracy and inconsistency in location data. It is less-pronounced in newer phones, but it greatly shows in older ones.

Before our Streaming API

Before we finished the Geoloqi Streaming API and before we started using Node.js and Socket.io, everything was based on Polling for new updates. Phones reported their location at 5 second intervals and the browsers would update the game board in 5 second intervals. 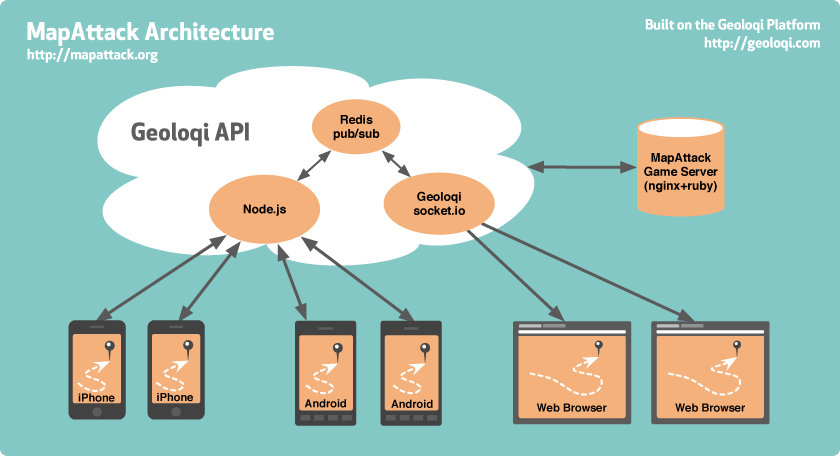 Socket.io is a cross-browser web socket implementation allowing us to do real-time data updates on the browser and also supports older browsers. We can use the latest technology without requiring all of our users to update to the newest browsers, thanks to Socket.io falling back to older technologies in older browsers. This allow us to do instant updates across browsers and the phones in the game.

Node.js is Evented I/O for V8 Google’s JavaScript implementation for Chrome, implemented with a reactor pattern, that enables for large amounts of Asynchronous data traffic.

We use a Node.js server to stream the location data from the phones to the Redis pub/sub channel. It publishes to Redis, and another Node server subscribes to that redis channel. Our Node.js server receives updates from the phones using a custom protocol similar to Google’s Protocol Buffers, which is essentially a very compact binary JSON.

In essence, Socket.io allows us to use Websockets, which are completely new, but also allows this to work on older browsers thanks to the fallback tricks.

Redis is an open source, advanced key-value store that has support for message queues using something called publish/subscribe, or pub/sub (not to be confused with PubSubhubbub).

From the higher level what this lets us do is handle the difficulty of sending data to all of the phones in the game and the browser in real-time. Every phone in the game sends its location to the server, which broadcasts that data to every other phone and browser watching the game.

One of the interesting things about the publish/subscribe system is that with a traditional system you have to maintain connections and iterate through each in order to pass data through them. The alternative would be that if you had 10,000 users you’d have to iterate through an array of 10,000 connections, which would be very slow and prone to locking up on socket problems.

Using Redis pub/sub is like starting a radio station. Once it is turned on, people (in this case, browsers) can just listen in. This allows us to do real-time data updates to clients (browsers and phones) at a massive scale.

Sinatra::Synchrony is a small extension for Sinatra that dramatically improves the concurrency of Sinatra web applications. Powered by EventMachine and EM-Synchrony, it increases the number of clients your application can serve per process when you have a lot of traffic and slow IO calls (like HTTP calls to external APIs). Because it uses Fibers internally to handle blocking IO, no Callback gymnastics are required! This means we can just develop as if we were writing a normal Sinatra web application.

Sinatra::Synchrony allows us to do asynchronous programming (ala Node.js), except that it wraps the callbacks in Fibers (which are basically co-routines in Ruby). This allows you to do synchronous programming while taking advantage of asynchronous code. Aside from being easier to program this way, it also allows us to switch to a different concurrency/parallelism strategy if we need to. Kyle Drake developed Sinatra Synchrony specifically for MapAttack. Drake’s work became popular after he made a presentation on Sinatra::Synchrony at PDX Ruby.

Finally, there is the MapAttack Game Server. In this case the Game Server is a simple database that takes care of storing the player point data that is displayed on the map and on the phones as players grab points in real-time.

We’ll be bringing MapAttack! to WhereCamp Portland on October 7-9, 2011. We’ll give an overview of the technology there as well. If you plan to be in the area, please join us.

Be sure to read the next Tools article: The Object Network: Making Mashups Easy