Slack, a popular collaboration tool that helps teams streamline communication and eliminate email clutter, has set its sights on becoming the default messaging platform that developers integrate with. With more than 2 million daily users and a growing developer community, it was only a matter of time before Slack would capitalize on its popularity and make a clear play in the form of an Application Marketplace.

Slack officially announced the Slack Platform at a recent Launch event. As part of the launch, it announced an $80m Slack fund, an App Marketplace and a resources to help accelerate development of Bots that run on the Slack platform.

The Slack App Directory launched with 160 applications that teams can integrate with starting today. While not at the level of a full marketplace that we see in the world of mobile, the stage is set for both established and new players to ensure that their applications are either “Slack first” or integrate well with it. With its growing popularity, it presents a great way for companies building on top of Stack to get an additional source of revenue and lock in the teams more to their product. 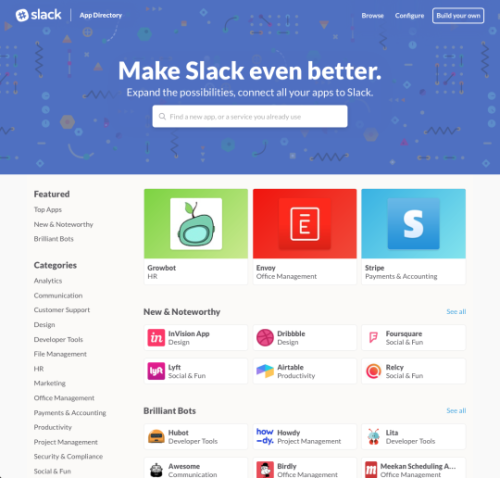 Slack Fund, comprising a total of $80m, is backed by Slack and six of its investors : Accel, Andreessen-Horowitz, Index Ventures, KPCB, Spark, and Social Capital.

Bots are getting popular and increasingly intelligent by the day, and Slack has made them first-class citizens from the beginning. To help accelerate development of Bots,  Botkit developed by Howdy has been released as a framework for build Slack bots. The framework provides building blocks for common actions in Slack and the focus is on developers not worrying on the lower level plumbing but high level actions that bring direct value to the teams.

Slack is well poised to capitalize on messaging and opening up an Application Marketplace is one great way to grow the ecosystem. Other messaging platforms like Cisco Spark and Hipchat have their task cut out, as all of them move towards capturing the Enterprise communication.

If you are looking at getting started with Slack development, check out the official API document. We have covered several deep dive articles in the past that cover Slack Integrations like Custom Slash commands and Webhook Integration.

Be sure to read the next Messaging article: Unified Inbox Aims to Simplify Communications with Launch of UnificationEngine